Back to all posts

Song off of "If You Have to Ask... Warrior Songs Volume 1" nominated for NAMA

“Bullet Dress” off of “If You Have to Ask… Warrior Songs Vol. 1” was nominated for 2017 Single/Song of the Year at the Native American Music Awards.  The song began as a poem by combat army veteran Melissa Doud.  Melissa’s poem about a jingle dress she created out of spent bullet casings collected during her 20 years in the Army was turned into a song by Marco Frucht and Saji Villoth.  It was recorded at SurroundinSound Studios in Wauwatosa Wisconsin with Melissa Doud singing and Saji’s band The Mambo Surfers providing the music.  When we learned that the song had been nominated for a NAMA Warrior Songs held a special fundraiser and raised $1,500 to help send Melissa and members of the Mambo Surfers to the award show in Niagara Falls, New York on October 14th.  The award ultimately went to WWE star Mickie James for her song “Shooting Blanks”.  Mickie James was also inducted into the Native American Music Awards hall of fame.  Everyone was honored to have “Bullet Dress” nominated alongside so many other talented artists.  Thank you to everyone who donated to both the creation of Warrior Songs Vol. 1 and too sending Melissa and the band to the 2017 NAMA’s!  View more pictures here 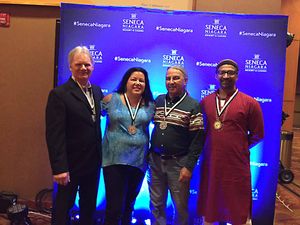 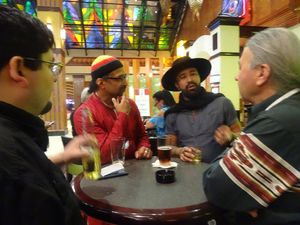